As a professional camcorder the Sony FS7M2 features excellent hardware, it is equipped with Super 35-Sized CMOS Sensor, Locking Sony E-Mount, Integrated Electronic Variable ND Filter, Dual XQD Memory Card Slots etc. with the help of the powerful hardware, you can capture DCI 4K (4096 x 2160) up to 59.94p, UHD up to 59.94 fps, or HD up to 180 fps. XAVC-I/L, MPEG-2, XAVC up to 600 Mb/s is supported, so you can easily capture top quality videos with Sony FS7M2 Super 35 camcorder.

Step 1. Download Acrok Video Converter Ultimate (Windows/Mac) from the website, install this 4K video converter on your Windows or Mac computer, this program has Windows version and Mac version, both of them can help you to convert 4K MXF videos. 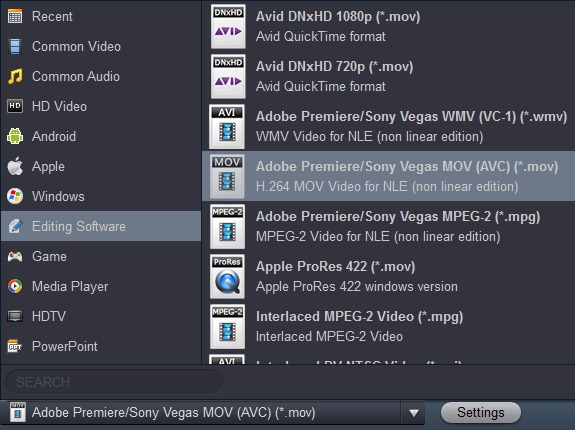 Step 4. Adjust the output parameters. This Sony FS7M2 to Premiere Pro CC Converter supports customization feature, after you selected the output format, you can click “Settings” button to adjust the resolution, bitrate, frame rate, codec, etc. and then you can change these parameters according to your need.

You just need to wait some time, NVIDIA CUDA and AMD APP acceleration technology is adapted, so your videos will be converted at fast speed with top quality, when the Sony FS7M2 to Premiere Pro CC conversion is finished, you can load converted videos to Premiere Pro CC and then edit natively, there’s no problem anymore.