“Hi there, have you used video converter program to convert videos for iPad Pro? I have download some movies from the web and they are in MKV, AVI, WMV and other formats, I copied them to iPad Pro and found the videos can’t be played by iPad Pro, I was told that these videos are not supported by iPad Pro, and I need to convert these videos to iPad Pro supported formats, so can you recommend a good iPad Pro video converter for me? Thanks in advance!”

iPad Pro is the hottest tablet on the market now, there are more and more fans choose to buy the newly released iPad Pro tablet, it has more powerful hardware and the latest operating system, with this tablet you will be able to do more things. At your free time, you may want to copy movies or videos onto iPad Pro for watching, but before you copy movies from computer to iPad Pro, you will need to know that iPad Pro supported video formats are limited, from iPad Pro user manual or its official product page you will know iPad Pro can only play MOV, MP4 and M4V formats, so if your videos are in other formats like Blu-ray, DVD, MKV, AVI, WMV, FLV, MPG, VOB, MTS, etc. you will need to use iPad Pro video converter to convert videos to supported video formats for iPad Pro, and then you can play MKV, AVI or WMV on iPad Pro with compatible formats.

To help you convert MKV, AVI, WMV or other formats to iPad Pro compatible formats, we would like to recommend the best iPad Pro video converter for you, the software is Acrok Video Converter Ultimate, this software has Windows version and Mac version, with this iPad Pro video converter you don’t need to worry about any video playback issues with iPad Pro. This powerful converter can convert all the videos for you, supported videos include Blu-ray disc, Blu-ray ISO, DVD disc, DVD ISO/IFO, MKV, AVI, WMV, MOV, M4V, MTS, VOB, MPG, TiVo, etc. you can import all the videos into it for converting.

2. After you launched the iPad Pro video converter, click add files button to load HD videos that you want to convert, such as MKV, AVI, WMV, FLV or VOB files. If you want to rip blu-ray to iPad Pro or rip DVD to iPad Pro, please click “Load Disc” button to import the disc or ISO/Folder files.

3. Please choose iPad Pro video format for output, to convert videos to iPad Pro, we recommend you to choose Apple -> New iPad Video (*.mp4), with this output formats you can easily play videos on iPad Pro, there will be no video playback issues anymore. 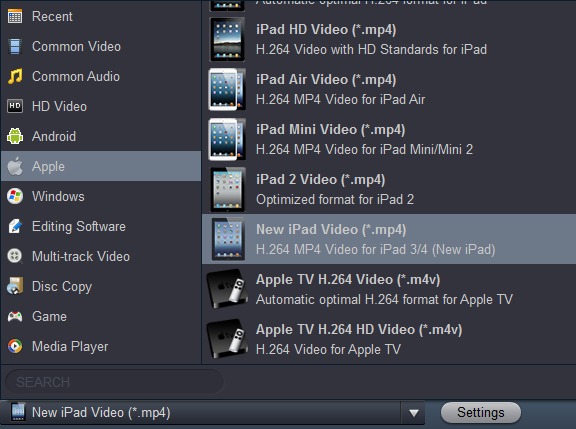 4. This iPad Pro video converter has powerful customization feature, you can click settings button and then adjust the resolution, bitrate, frame rate or other parameters according to your need. For example you can change the resolution to 1920*1080 or 1280*720, and then you can play 1080p video or 720p video on iPad Pro.

This iPad Pro video converter will help you rip Blu-ray/DVD movies or convert HD videos at top quality and speed, it used NVIDIA CUDA and AMD APP acceleration technology, so it will convert videos at very fast speed, this will save much time for you, when the conversion is finished, you can open output folder and get the converted videos or movies, and now they are in iPad Pro compatible format, now you can transfer converted movies from computer to iPad Pro tablet, and then you can play MKV, AVI or WMV on iPad Pro with compatible format. Just try it!