To most users it’s not so easy to play Blu-ray with VR device, as it is not so easy to play Blu-ray on your computer that connected with a VR. If you have purchased Blu-ray disc and inserted it into the Blu-ray drive, we suggest you to use Acrok Video Converter Ultimate software to play Blu-ray movies, this is a powerful VR Blu-ray player and Blu-ray Ripper software, it can play Blu-ray disc, Blu-ray ISO, Blu-ray folder as well as DVD disc or DVD ISO files, what’s more, it can rip latest Blu-ray and DVD movies to unprotected common videos, such as convert Blu-ray to MKV, convert Blu-ray to MP4, etc. and then you can play Blu-ray on your computer, or copy ripped Blu-ray movies to other playable devices for watching.

If you have the need to play Blu-ray on computer which connected to the VR device, you can choose Acrok Video Converter Ultimate as your VR Blu-ray player, it can play your Blu-ray movies with the best quality, now you can get this VR Blu-ray player from the link below, you can also follow the steps below to convert Blu-ray movies for your VR device or other playable devices.

Step 1. Download and install Acrok Video Converter Ultimate software on your computer, run it as the best Blu-ray player and Blu-ray ripper software, you will see the main interface. If you need to use this Blu-ray player/Blu-ray ripper software on Mac computer, you can also download the Mac version, both Windows version and Mac version are available to use.

Step 2. After you launched this VR Blu-ray player software, you can click “Load Disc” button on the top left corner to load your Blu-ray movies, Blu-ray disc and Blu-ray ISO/folder are supported, you can also load DVD movies into it.

Step 4. If you want to convert Blu-ray movies, after you loaded the Blu-ray movies, please choose output format you need. For example you can choose Multi-track Video -> Multi-track MKV (*.mkv) for output, this format can maintain all the original subtitles, audio tracks and languages for you, and you can convert Blu-ray movies with quality lossless. You can also choose Common Video -> H.264 MP4 Video (*.mp4), this format is supported by nearly all the playable devices. 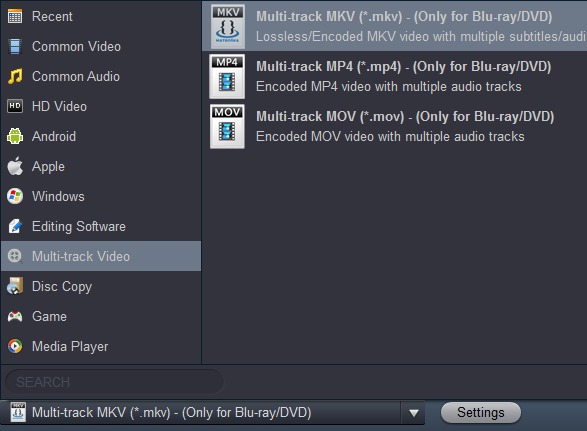 Step 4. Acrok converter has easy-to-use customization feature, after you selected the output format, you can click “Settings” button to adjust the output parameters, such as resolution, bitrate, frame rate, codec and others, if you don’t need to adjust you can skip this step.