“I have just bought Microsoft surface pro 3 tablet, I love this tablet because it is so convenient for me to use, I can use it to do word editing, send and receive mails, surface the web and play movies. But recently I encountered a problem, that I want to transfer Blu-ray disc movie to Windows 8.1 tablet – surface pro 3, I don’t know what’s the best way, because the surface pro 3 Windows tablet doesn’t have Blu-ray drive, and I don’t know what program can convert the Blu-ray movies, so I need your help, any suggestion is appreciated. Thanks!”

How to play Blu-ray on Windows 8.1 tablet or Windows 8 tablet?

On the market, there are more and more tablets equipped with Windows 8/8.1 operating system, such as surface pro 3, surface pro 2, Dell venue 8 pro, Acer W4, Lenovo ThinkPad 8/10, etc. more and more users choose to buy another tablet with Windows OS, because we can install and run desktop programs on Windows 8.1/8 tablets freely. But there is one difficult question is not so easy to solve, that’s the way to play Blu-ray on Windows 8/8.1 tablet, as we know nearly all the Windows tablets don’t have Blu-ray drive, so you can’t insert the Blu-ray for playing directly. So what’s the way to play Blu-ray on Windows 8.1 tablet or Windows 8 tablet?

The best method is to use a Blu-ray ripping program to rip Blu-ray to Windows tablets best supported video format, and then you can play Blu-ray on Windows 8/8.1 tablet at anytime, anywhere. Here you will need a Blu-ray ripper – Acrok Video Converter Ultimate, this software can works as Windows tablet Blu-ray player, because it can be installed on your computer or Windows 8.1/8 tablet to play Blu-ray/DVD ISO/Folder videos, HD video playback is also supported, it is an all-in-one player; the most important is this software is the best Blu-ray ripper on the market, it can rip Blu-ray/DVD disc/ISO/Folder movie on PC or Mac to common videos, or convert Blu-ray to FCP X software for editing, and then you can transfer ripped videos to Windows tablets for watching with compatible format.

How to convert Blu-ray to Windows 8/8.1 tablet best format?

Below are easy steps that you can follow to use this Windows tablet Blu-ray player/Blu-ray Ripper, just follow them.

1. Free download Blu-ray ripper for Windows tablet, install this program on your PC or Mac, please make sure you have connected a Blu-ray drive to the computer that you want to run the software.

2. Launch the program, you will see its brief main interface. Please click load disc button to import your Blu-ray, DVD or HD videos, disc/ISO/Folder are all supported.

3. Choose output format. We recommend you to choose MP4 format for playing on Windows tablet, because it is compatible format for portable devices.

4. Click settings button to adjust the output parameters, this step is optional. 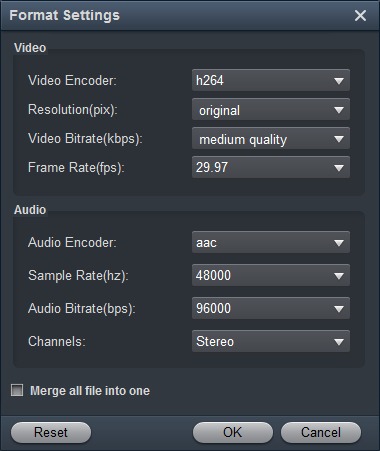 This Windows tablet Blu-ray ripper has equipped with NVIDIA CUDA and AMD APP acceleration technology, so it can rip Blu-ray/DVD at fast speed, much time is saved for you. When the Blu-ray to Windows tablet conversion is finished, you can transfer converted Blu-ray videos to Windows tablet and play Blu-ray on Windows 8/8.1 tablet freely.