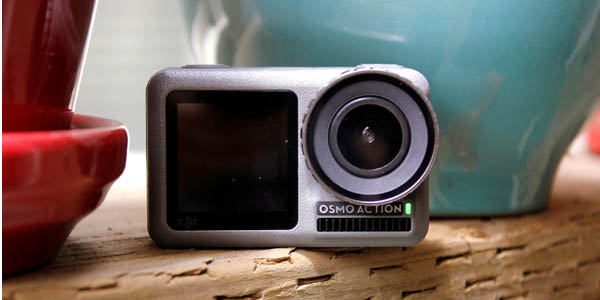 As a new action camera on the market, DJI Osmo Action is loved by many fans, it is the first sport camera from DJI, it has so many new features, such as dual screens, rocksteady, 4K HDR video, 8x slow motion, UHD image quality, waterproof, etc. with the help of DJI Osmo Action, you can capture 4K/60fps video at 100Mbps, the recorded videos will be in high quality.

DJI Osmo Action is a nice camera for you to capture sport videos, and it can record 4K videos to MOV and MP4 formats, nowadays many compact cameras can capture 4K videos with MP4 or MOV format, it is convenient for playing with MOV or MP4 format. But, most 4K MP4 videos and MOV videos are in H.264 codec, which is a good codec for playing but not editing. Many video editing programs have not added native support for 4K videos, so there are a lot of video compatibility issues between DJI Osmo Action and FCP X/7/6. Just like the problem showed above, many users have encountered the DJI Osmo Action to FCP X/7/6 importing and editing issues, if you have encountered this kind of issue, please don’t worry, we will share the best workflow to handle DJI Osmo Action 4K video with FCP X, FCP 7 and FCP 6.

Step 1. Please get Acrok Video Converter Ultimate for Mac through the link, download and install this DJI Osmo Action to FCP converter on your computer. Besides Mac version, if you want to convert DJI Osmo Action 4K files on Windows computer, you can choose the Windows version.

Step 3. Click the format bar and choose the native format for FCP X/7/6. Just click and choose “Final Cut Pro -> Apple ProRes 422 (*.mov)” as the exported video format. Apple ProRes codec is the native editing codec for Final Cut Pro, with this codec you can deal with your videos smoothly. What’s more, you are free to choose any formats you need in the format list, for example you can convert DJI Osmo Action 4K MOV/MP4 to DNxHD codec for Avid, or convert video to AIC for iMovie with this program.

The 4K video conversion will begin immediately, video and audio synchronization is perfectly guaranteed by Acrok Video Converter Ultimate. What’s more, this powerful 4K video converter has adapted NVIDIA and AMD acceleration technology, much time will be saved. When the DJI Osmo Action to Final Cut Pro X/7/6 conversion is done, you can import the converted DJI Osmo Action files to FCP X/7/6 for editing natively, there will be no importing and editing problems anymore, and you can edit your footages with Apple ProRes codec, which is natively supported by FCP X/7/6. Now just download Acrok Video Converter Ultimate onto your computer, and try it as you want.