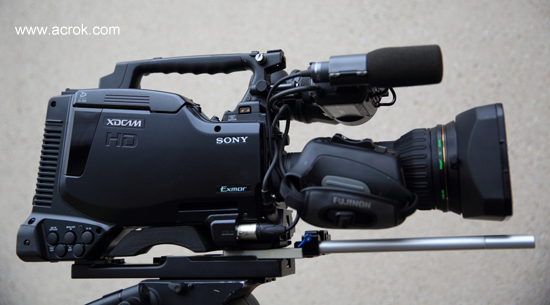 The Sony PDW-680 XDCAM HD422 camcorder is a mid-range Professional Disc camcorder with many of the same features as the more advanced PDW-700. The PDW-680 has three 2/3-inch type Exmor CMOS sensors for recording 1080/50i or 1080/60i HD images or MPEG IMX and DVCAM SD, as standard. Progressive mode is available only for playback. The PDW-680 is designed to enable a smooth migration from tape camcorder use to PC-based operation to improve workflow efficiency with MXF/MPEG interoperability and metadata functions.

MXF is a file format for the exchange of programmer material between servers, tape streamers and to digital archives. MXF bundles together video, audio, and programmed data, such as text – together termed essence – along with metadata and places them into a wrapper.

Due to the opaque subformat options obscured behind the MXF file extension, there were major interoperability problems with MXF in broadcast use. To fix this problem, Avid Media Composer has developed AMA MXF Plug-in which offers the ability to link and edit with Panasonic P2, Sony XDCAM and Canon XF directly without capture or transcoding, you have to install different versions of AMA plug in for different version of Avid Media Composer.

Although the AMA plug-in can solve some people’s confusion about importing Sony PDW-680 MXF media to Avid MC for editing, it’s not for all the cases. If for any reason you are unable to deal with Sony PDW-680 MXF footage in Media Composer even with the AMA plug-in installed, you can consider transcoding PDW-680 MXF footage to Avid preferred DNxHD codec first. DNxHD is Avid’s favorite editing codec, which Media Composer will recognize and handle well.

Tip: Want to play Blu-ray or DVD moveis on your tablet? Acrok Video Converter Ultimate is an all-in-one media converting tool that is specialized in removing the protection restrictions and extracting the movies off Blu-ray and DVD disc and convert them into proper format of your choice.

How to Convert Sony PDW-680 MXF for editing via Avid Media Composer?

Step 1. Add Full HD MXF videos
Launch the MXF to Avid Media Composer converter. Drag the Sony PDW-680 footage to the program. Or you can also click “Add file” button on the top of the top MXF Converer main interface to import video to the software. It supports batch conversion and joining multiple video clips into one file.

Tip: Click the Settings icon, you can adjust video and audio parameters like codec, bit rate, frame rate, sample rate, etc., in that way, you can take charge of the size and quality of the output files.

Step 3. Start Conversion
Click the “Convert” icon under the preview window to start transcoding MXF to DNxHD MOV for Avid importing. After the conversion, click “Open” to locate the output videos. Then, it would be easy for Avid Media Compoer to read and edit the MXF video clips. Thats’s all.